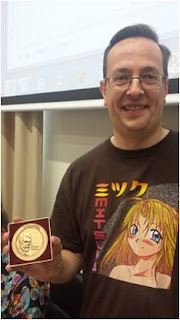 Mitsuku, a Chatterbot created by Steve Worswick, won the 2013 Loebner Prize bronze award as the most human-like chatbot.

What about Steve Worswick's first chatbot? I've asked Steve to share his experience with me and people who are trying to start making chatbots.

Steve Worswick: "Back in the early 2000s, I used to create dance/techno music as a hobby and had a little success with a couple of nationwide releases. One of my fellow producers had a chatbot on his website which was only a simple chatbot that could reply to common phrases but I was hooked on it and wanted one for my own site.

I’d grown up on a diet of Knight Rider, Star Trek and Terminator and always thought talking to a computer was really cool so I looked around the internet and found www.pandorabots.com where you can make a chatbot for free. After a few months of changing all the default responses to match my character, I had a teddy bear chatbot up and running on my website.

My artist name at the time was Square Bear and so I thought a teddy bear would be most appropriate.


Visitors to my site often talked to the bear and in fact, it got to the point where more people were visiting my site to talk to the bear than to listen to my music. I took this as a hint as to the quality of my music and decided to drop the producing to concentrate solely on maintaining and improving the chatbot.

However, I nearly gave up on it several times. In the early stages it was very frustrating to see it get most responses wrong and people were often calling it stupid but eventually, it got better and people started being nice to it. I would advise any potential chatbot writers out there to look at other people’s work. I have lots of free AIML files available on my website: www.mitsuku.com for people to use and learn from. I would also advise using AIML and www.pandorabots.com. AIML has a HUGE following and is so simple to use and understand.

My biggest piece of advice though would be “Never give up”. It may seem like an impossible task and you will want to stop working on it but please don’t. If I had done that, I wouldn’t be sat here now with a Loebner Prize medal ☺!